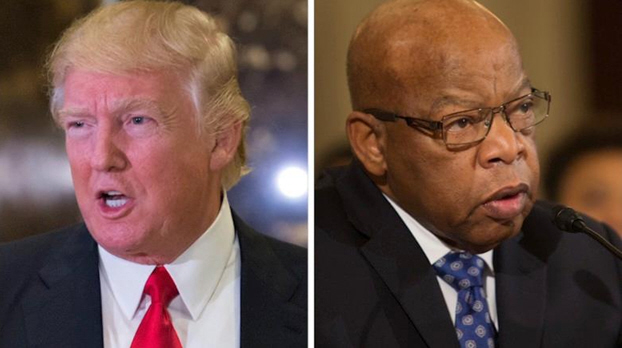 President-elect Donald Trump attacked Democratic Congressman and civil rights leader John Lewis on Twitter Saturday morning, after Lewis said Trump was not a “legitimate president” and announced that he would not attend the upcoming inauguration. Time
It’s almost as if they were surprised.
President-elect Donald Trump sparked outrage (again) Saturday by attacking Rep. John Lewis, D-Ga., after the civil rights icon said he would skip Trump’s inauguration and doesn’t consider his election legitimate.
“Congressman John Lewis should spend more time on fixing and helping his district, which is in horrible shape and falling apart (not to mention crime infested) rather than falsely complaining about the election results,” Trump tweeted. “All talk, talk, talk – no action or results. Sad!”
The reaction, as one would imagine, was swift. Democrats, celebrities and even some Republicans weighed in.
“John Lewis and his ‘talk’ have changed the world,” Sen. Ben Sasse, R.-Neb., tweeted with a link to a photo of Lewis in 1965, when he was badly beaten at the Selma bridge in a voting rights march.
Rep. Kevin Yoder, R-Kan., said he disagrees with Lewis’s questioning of the presidential election, but said he is a “hero & icon.”
“He deserves all of our respect,” Yoder tweeted. “He’s earned it.”
NAACP President Cornell Brooks demanded that Trump apologize and said that by disrespecting Lewis, Trump had “dishonored Lewis’ sacrifice & demeaned the Americans & rights, he nearly died 4.”
Former Republican National Committee chairman Michael Steele had some concise advice for Trump.
“Number one, don’t tweet that. Number two, don’t go there,” he said on MSNBC, adding that the attacks were “unnecessary” and “unfortunate.”
Rep. Justin Amash, R-Mich., was even more succinct.
“Dude, just stop,” he tweeted after Trump continued tweeting about Lewis.
Senate Minority Leader Chuck Schumer, D-N.Y., expressed support for Lewis, a “friend” and “American hero,” and House Democratic Leader Nancy Pelosi noted that many people have tried to silence Lewis over the years.
“All have failed,” she tweeted.
Newly elected Sen. Kamala Harris, D-Calif., also weighed in.
“John Lewis is an icon of the Civil Rights Movement who is fearless in the pursuit of justice and equality,” she wrote. “He deserves better than this.”
That was mild compared to some of the reactions on Twitter.