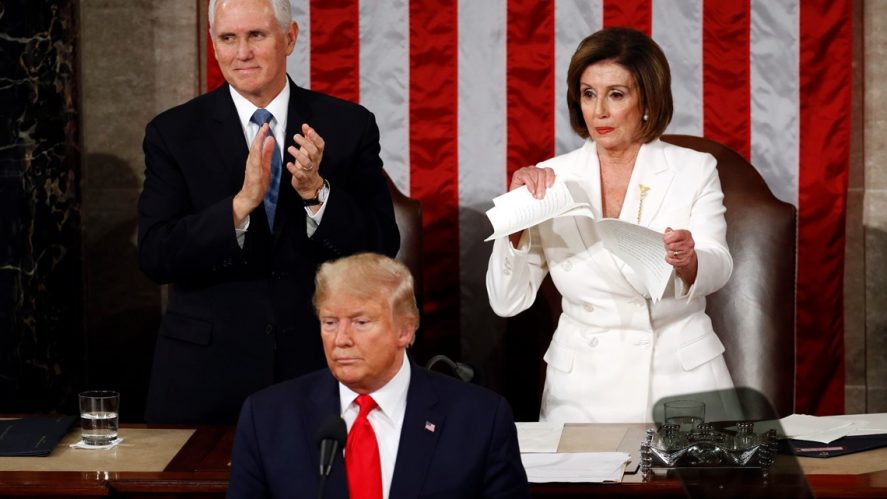 A leading supporter of President Trump in Congress has filed an ethics complaint against House Speaker Nancy Pelosi, D-Calif., for “mutilating” a government record.

The reference is to the copy of President Trump’s State of the Union address that Pelosi dramatic tore in half on national television immediately after the president concluded his speech. Pelosi has tried to justify her stunt, saying she was tearing up a bunch of lies. But Gaetz is citing a federal law forbidding the destruction of federal documents that carries the possibility of three years in prison upon conviction.

He wrote on Wednesday to the House Committee on Ethics, chaired by Democratic Rep. Ted Deutch of Florida. “I write to request that the House Committee on Ethics open an investigation into Speaker Nancy Pelosi’s flagrant violation of decorum, as defined in clauses 1 and 2 of House Rule XXIII (‘Code of Official Conduct’), and request a criminal referral for her potential violation of 18 U.S.C. paragraph 2071 (concealment, removal, or mutilation of documents), following President Trump’s recent State of the Union Address on February, 4, 2020,” Gaetz wrote.

“Her unseemly behavior certainly warrants censure.” He mentioned the fact that the president praised Tuskegee Airman Charles McGee, African-American student Janiyah Davis and others in the speech. “When the president finished speaking, to thunderous applause and a standing ovation, the speaker took her copy of his prepared remarks and tore them in half, placing the remnants on the dais while President Trump went to greet lawmakers,” Gaetz wrote. “It is hard to overlook the symbolism of such a gesture – the sense that speaker Pelosi was utterly dismissive of the president’s achievements, and, more importantly, the achievements of the American people. Speaker Pelosi’s gesture was deeply offensive.” He said the behavior violated House rules and did not “reflect creditably on the House.”

“The speaker should not let her personal feelings about the president color her behavior as a leader in the United States Congress, but … her actions last night have brought discredit on the entire House.” He also pointed out the penalty of up to three years in jail for anyone who “mutilates, obliterates, or destroys … any record, proceeding map, book, paper, document.” There is no question that’s what happened, he insisted.

On Twitter, Gaetz wrote: “I’m filing an ethics complaint against @SpeakerPelosi for destroying @realDonaldTrump’s State of the Union

Speech. … Nobody is above the law. She must be held accountable.”