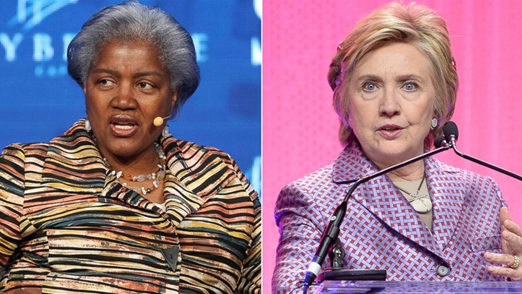 “Presidential debate questions are extremely valuable and they are kept highly confidential before debates. If candidates could legally purchase the questions in advance, they would surely pay a small fortune,” Sukhia continued. “Federal law not only prohibits misappropriating valuable confidential information, it also makes it a crime for anyone to knowingly receive such misappropriated information.” “A violation of the law carries a sentence of up to 10 years in Federal prison and a $5,000,000 fine,” Sukhia said. WikiLeaks published an email Monday from Brazile uncovered in the hack of Clinton presidential campaign Chairman John Podesta’s email account.

With the subject line that read, “One of the questions directed to HRC tomorrow is from a woman with a rash,” the email shows Brazile tipping off Podesta and Clinton communications director Jennifer Palmieri ahead of the March CNN primary debate. “Her family has lead poison and she will ask what, if anything, will Hillary do as president to help the ppl of Flint,” Brazile wrote. “Folks, I did a service project today. It’s so tragic. And what’s worse, some homes have not been tested and it’s important to encourage seniors to also get tested.”

A day later, as Breitbart News previously reported, the CNN town hall debate between Senator Bernie Sanders and Clinton included a question from a woman in the audience: After my family, the city of Flint and the children in D.C. were poisoned by lead, will you make a personal promise to me right now that, as president, in your first 100 days in office, you will make it a requirement that all public water systems must remove all lead service lines throughout the entire United States, and notification made to the — the citizens that have said service lines. “If someone misappropriated confidential debate questions intended to be held in secrecy by a network and then passed them on to another who knew or had reason to believe they were improperly obtained, both parties could face criminal prosecution under federal law, 18 United States Code §1832,” Sukhia said. Brazile, a longtime Clinton confidant, has since resigned in disgrace as a CNN contributor. The Network said Brazile was never given “access to any questions, prep material, attendee list, background information or meetings in advance of a town hall or debate,” adding, “We are completely uncomfortable with what we have learned about her interactions with the Clinton campaign while she was a CNN contributor.”