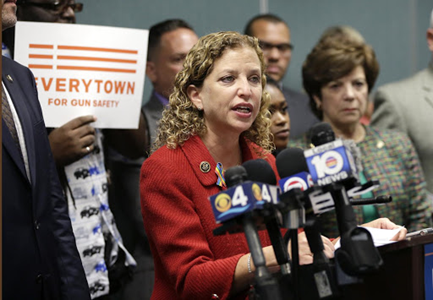 PHILADELPHIA —Democrats arrived at their nominating convention on Sunday under a cloud of discord as Debbie Wasserman Schultz, the chairwoman of the Democratic National Committee, abruptly said she was resigning after a trove of leaked emails showed party officials conspiring to sabotage the campaign of Senator Bernie Sanders of Vermont.

The revelation, along with sizable pro-Sanders protests here in the streets to greet arriving delegates, threatened to undermine the delicate healing process that followed the contentious fight between Mr. Sanders and Hillary Clinton. And it raised the prospect that a convention that was intended to showcase the Democratic Party’s optimism and unity, in contrast to the Republicans, could be marred by dissension and disorder.

The day also veered extraordinarily into allegations, not easily dismissed, that Russia had a hand in the leaks that helped bring down the head of an American political party. Despite those concerns, Democrats are hoping that focusing on Donald J. Trump, the Republican nominee, will galvanize the party to rally around Mrs. Clinton, and on Sunday those efforts received a major boost when Michael R. Bloomberg, the former Republican and independent mayor of New York, said he would endorse her. In her resignation statement, Ms. Wasserman Schultz, a representative from Florida, said she would continue to fight for Mrs. Clinton from the sidelines. “I know that electing Hillary Clinton as our next president is critical for America’s future,” Ms. Wasserman Schultz said in a statement. “I look forward to serving as a surrogate for her campaign in Florida and across the country to ensure her victory.” She added, “Going forward, the best way for me to accomplish those goals is to step down as party chair at the end of this convention.” Donna Brazile, a vice chairwoman of the Democratic National Committee, will be the interim chairwoman through the election, the committee said. Ms. Wasserman Schultz has faced a flurry of negative stories during her five-year tenure as the committee’s chairwoman, with critics charging that she was more focused on promoting her career than on the party, but she had resisted calls to quit.